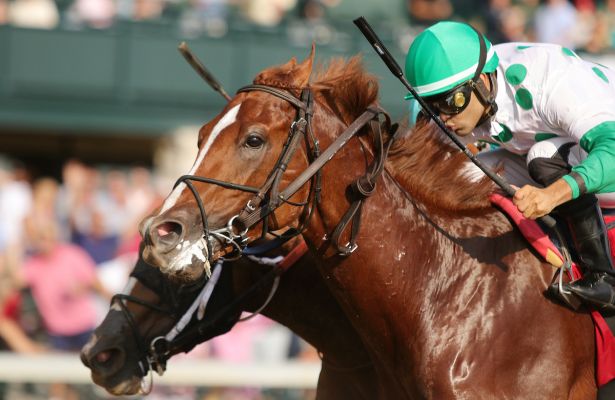 Leaving this weekend’s final major round of preps, here’s what we know so far about the Breeders’ Cup Sprint: It looks like the one-two finishers from last year’s running – Roy H and Imperial Hint – will face off again in the same division, with Roy H back to form after his repeat Santa Anita Sprint Championship win.

But what do we make of Mind Your Biscuits, Promises Fulfilled and Limousine Liberal? Decisions will need to be made in the weeks leading up to the Nov. 3 races at Churchill Downs.

Mind Your Biscuits could head to the Sprint, the Dirt Mile or the Classic. He won his first route race in the Lukas Classic (G3), but all three of his Grade/Group 1 wins have come around one turn.

Promises Fulfilled is riding a three-race win streak into the Breeders’ Cup, all of them sprint victories, including the

Phoenix (G2) against older horses. Trainer Dale Romans does not believe he is restricted to sprinting and is deciding between the Sprint and the Dirt Mile.

Limousine Liberal, third in the Phoenix with a troubled trip, will likely head to the Sprint, but is also under consideration for the Dirt Mile.

This leaves the real shape of the Sprint in question. Who is going to stretch out, and who is going to stay sprinting? The Sprint could be a very exciting race if all connections decide to go, but it wouldn’t be surprising to see Mind Your Biscuits continue his route efforts in the Classic or to see a couple sprinters stretch out in the Dirt Mile in hopes of an easier chance to hit the board.

And what about Enable?

First, Enable was made the favorite in the Breeders’ Cup Turf Future Wager. Then trainer John Gosden said it was possible she could appear in the race. Finally, on Sunday the 4-year-old filly won the Prix de l’Arc de Triomphe (G1) for the second year in a row, and she wasn’t even said to be in top shape.

She had one previous race this whole season and it was over a synthetic surface against three other horses. Between her delayed return and the Arc she also dealt with a fever. Enable’s victory this year may not have been as flashy as last year’s, but it shows how talented this filly is after overcoming multiple obstacles to win one of the most prestigious races in the world.

Enable also seems to relish 1 ½ miles, and the Breeders’ Cup Turf is run at the same distance. She’s already handled Europe’s best. We’ll find out in the next 10 days if she takes on another tall task.

Saturday’s Beldame (G1) at Belmont and Sunday’s Spinster (G1) at Keeneland appeared to include runners in top form heading to the Breeders’ Cup Distaff.

Wow Cat was already a multiple Group 1 winner in her native Chile, but she earned her first North American Grade 1 in the Beldame. She was a game third behind Abel Tasman and Elate in the Personal Ensign (G1), only her second U.S. start, and she was a clear winner Saturday at Belmont Park. Plus, since then Abel Tasman flopped in her final Breeders’ Cup prep, and Elate will miss the championship race.

Blue Prize has four wins from five starts this season and just picked her first Grade 1 in the Spinster at Keeneland. She also seems to love Churchill Downs, where her two wins prior to the Spinster came, and will have that as an advantage in the Breeders’ Cup. She abruptly drifted out past the middle of the track after taking the lead in the Spinster and probably would have won by several lengths if it wasn’t for that.

Should Abel Tasman return in top shape and Monomoy Girl run to the best of her ability, those two will be difficult to beat. But Wow Cat and Blue Prize couldn’t have tuned up any better for the Distaff, and they showed they are strong contenders for a race with a questionable favorite.

A cloudy juvenile picture on the East Coast

Looking at the colts on the East Coast, it’s hard to leave Complexity and Knicks Go off the table after Saturday. While Complexity hasn’t run two turns yet, he was by far the best in the Champagne (G1). But the Breeders’ Futurity (G1) favorite Mind Control scratched the day of the race due to fever. It was going to be a two-turn test for the Hopeful (G1) winner before Knicks Go stole the show instead with his 70-1 upset.

Earlier stakes winners failed to make an impact. Call Paul was third in the Champagne while in the Breeders’ Futurity, Sombeyay, Tobacco Road and Unionizer finished out of the money. Iroquois (G3) victor Cairo Cat, by the way, will miss the Juvenile due to a setback.

As with the colts, earlier stakes winners did not show up to play in the Alcibiades or the Frizette (G1), allowing Jaywalk to take the stage in the Frizette ahead of the Breeders’ Cup.

Filly and Mare Turf is Chad Brown’s to lose

This is far from a surprise, but Chad Brown will once again be loaded in the Breeders’ Cup Filly & Mare Turf, a race he’s already won three times. With multiple Grade 1 winner Sistercharlie away this weekend, Brown still won the First Lady (G1) with A Raving Beauty and the Flower Bowl (G1) with Fourstar Crook. These three pose a triple threat, and it wouldn’t be surprising to see Brown enter even more.

A Raving Beauty broke through in the Just a Game (G1) this spring. After two losses at Saratoga, she returned to form in the First Lady and led gate to wire. Fourstar Crook has been knocking on the door for a Grade 1 win and probably would have gotten it earlier if not for running against Sistercharlie. She is one of the most consistent horses in Brown’s barn. The Europeans have won the Filly & Mare Turf the past two years, but Brown stands a good shot at taking the title back.

And yes, it does help that Enable is looking at a possible start in the Breeders’ Cup Turf against the boys instead.

Racing Post - December 5, 2018
0
Scotland is off to a bright and frosty start this morning. Elsewhere it's grey and wet with some heavy rain for a time, although...

Does Horseracing Need An Anti-Doping Authority? One Kentucky Lawmaker Thinks So.