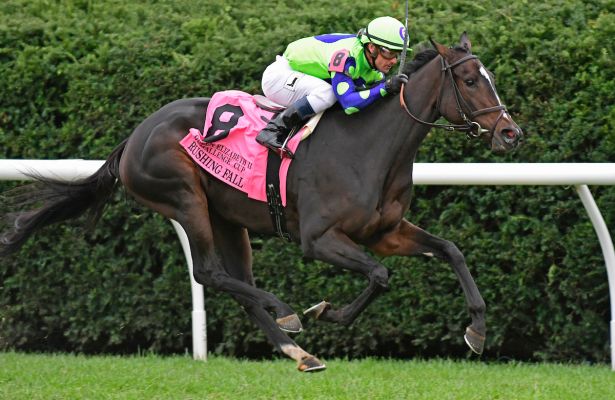 Rushing Fall might not be Breeders’ Cup-bound
as her future plans are undetermined, but she is one to keep an eye on whenever
she does face older fillies and mares. The 3-year-old daughter of More Than
Ready padded her record even more by winning the Queen Elizabeth II Challenge
Cup (G1) at Keeneland, her third graded stakes win at the track.

Last year’s Breeders’ Cup Juvenile Fillies Turf champion held
off the European shippers Mission Impassible and Nyaleti to win the QE II by 1 ¼
lengths. She was also handed the lead in a field lacking pace and continued to
beat up on her age group.

Although trainer Chad Brown will likely have multiple entries in the Breeders’ Cup Filly
& Mare Turf, including division leader Sistercharlie and ultra consistent
Fourstar Crook, it would be exciting for fans to see Rushing Fall test the
waters against older rivals. It’s hard to argue that she doesn’t deserve the
chance to run after a near perfect career at the biggest tracks.

On the other hand, her connections may not
want to put Rushing Fall up against her stablemates. Passing the Breeders’ Cup
would also allow them to test their young star against older competition later
this year or early 2019 before forming a campaign to the Breeders’ Cup with a 4-year-old Rushing Fall.

Whichever path she takes, she’ll be a top force in next year’s turf division against
older fillies and mares.

Europeans continue to dominate on turf

With
Breeders’ Cup just around the corner, this weekend was a reminder that
Europeans are a threat when they ship to the U.S. Rushing Fall was too good to
beat, but two Europeans finished behind her. And at Woodbine, the Europeans were the
stars.

The Canadian
International (G1) proved again that North America has no clear male
leader when it comes to route races on the turf. European shippers Desert
Encounter and Thundering Blue ran one-two over the up and coming Chad Brown-trained
Focus Group. The Grade 1 winners in the field failed to hit the board. Spring
Quality did the best in fifth, Canadian-based Johnny Bear was seventh and
Funtastic was last of 11.

The fillies and mares took the Woodbine stage in the E.
P. Taylor Stakes (G1) and it was again two Europeans on top. Sheikha
Reika notched her first graded or group stakes victory while Group 3 winner
Golden Legend was second. Santa Monica, another Brown trainee, came in
third.

If the pattern continues, the home team is in trouble for the Breeders’ Cup,
especially if two-time Arc heroine Enable makes the trip.

The Anokia Stakes was only a five-horse race, and all the best 2-year-old
fillies are preparing for a start in the Breeders’ Cup Juvenile Fillies, but Chasing Yesterday
showed interest in racing with her hard-fought victory.

A half-sister to American Pharoah, Chasing Yesterday was impressive when
breaking her maiden at Del Mar, much like her other siblings did before her.
She never got running in Saratoga’s Spinaway (G1) and it was later revealed she lost
a shoe. While a line could be scratched through the race since it was only her
second start, a better return was needed to show she could move forward.

The daughter of Tapit and Littleprincessemma made up ground throughout the six
furlongs and got up by half a length over a game It’sjustanillusion. Chasing
Yesterday could have given up down the stretch, but instead dug in under jockey
Drayden Van Dyke.

While a Grade 1 may be too big of a jump after this confidence booster, Chasing
Yesterday showed she is interested in the game and earned a chance to try and
build her graded stakes resume again.

editor - August 30, 2018
0
Horse racing is no different than other professional sports in how it is working hard to evolve with the digital media landscape to...

Accelerate’s campaign to set Horse of the Year precedent