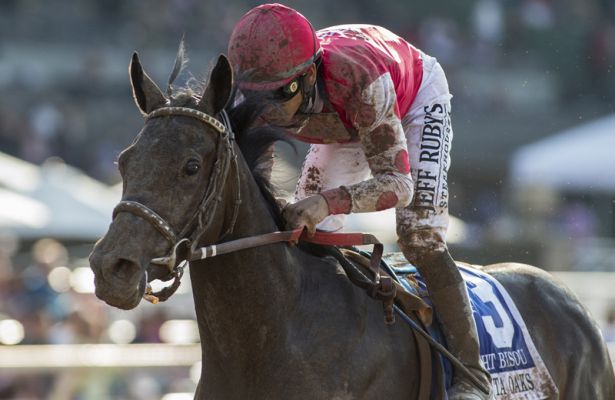 Both Saratoga and Del Mar began their summer meets this week, with Del Mar’s gates opening on Wednesday and Saratoga’s on Friday. These tracks traditionally attract the who’s who of the industry, with some of the year’s biggest races taking place where the turf meets the surf and at the Spa. Neither track has disappointed, with both providing excellent racing this weekend.

To find out more about this week’s most exciting prospects, keep reading. All post times are in Eastern Standard.

Awesome Slew looking for a win

Trainer Mark Casse will give millionaire Awesome Slew some class relief when the 5-year-old goes to post Saturday in Saratoga’s third race, a seven-furlong optional claimer. By Awesome Again, Awesome Slew has raced exclusively in graded stakes company for the last year and a half. His last victory came in September in the Ack Ack (G3), and his most recent effort saw him finishing eighth in the Met Mile (G1). The drop in class has Awesome Slew as the 9-5 morning line favorite, and he should have no excuses here. Post time is 2:07 p.m.

Southern Phantom has had a following right from the start. The reason has nothing to do with breeding, though that is solid, and everything to do with the colt’s appearance. By Bodemeister and out of the Bernardini mare Out for Revenge, Southern Phantom sports a unique, solid white head and a blue eye. Such was the reaction to the colt that owner Mike Moreno collaborated with BloodHorse in a naming contest. Now a 2-year old, Southern Phantom is set to debut in Saratoga’s sixth race for trainer Eric Guillot. He has been training solidly, including a last out bullet four furlong work from the gate. Post time is 3:49 p.m.

Second last out in the Tremont, Sombeyay enters the Grade 3 Sanford Stakes as the morning line favorite. He will break from the rail and is the only colt in the field with stakes experience. There is a solid lineup to face him, but first Sombeyay will have to get out of his own way, as he has found trouble in both career starts. The juvenile races are incredibly difficult to predict this time of year as handicappers have very little to go on in terms of past performances. I like the looks of several in this field, so Sombeyay is in no way a guaranteed winner. Post time for the Sanford is 5:40 p.m.

The nine-furlong Grade 1 Diana Stakes drew seven runners, six of which are graded stakes winners. Jenny Wiley (G1) winner Sistercharlie has been made the 9-5 morning line favorite with Just A Game (G1) winner A Raving Beauty a close 2-1 second choice. Hawksmoor has had a run of bad luck since winning the New York (G2) last year and can only improve off a fifth place Gamely (G1) finish in which she stumbled badly at the start. Proctor’s Ledge, New Money Honey and Ultra Brat all have a legitimate shot here, as well. Of those three, I like Proctor’s Ledge the best as the Ghostzapper filly is a perfect 2-for-2 at Saratoga. Post time is 6:18 p.m.

John Sadler sends out three in the San Diego

Trainer John Sadler is pulling a west coast version of Chad Brown’s strategy — taking multiple shots in a stakes race. Not only will he saddle favored Accelerate in the Grade 2 San Diego Handicap, but he has also entered Catalina Cruiser and Curlin Rules. All three are owned by Hrohis Racing. Not to be outdone, Bob Baffert will send out Dr. Dorr and Dabster, with Californian (G2) winner Dr. Dorr the better of the two. The race will be contested at 1 1/16-mile and will go to post at 8 p.m. ET.

Good luck betting the Grade 2 San Clemente Stakes! Not only did the race attract 14 runners, it also features a very tepid 9-2 morning line favorite in Ms Bad Behavior, who was second last out in the Providencia (G2). Rockin Ready would be a good place bet having finished second in four of five career starts. Three of the top four finishers in the Honeymoon (G2) all return for another shot at a graded victory while Summer Oaks (G2) winner Ollie’s Candy aims to remain undefeated. Post time is 8:30 p.m. ET.

Third time’s the charm, or so trainer Todd Pletcher hopes when he sends out Wooderson, a half brother to champion Rachel Alexandra, in Sunday’s fifth race at Saratoga. The colt was a close second upon debut but finished a troubled fifth in his second career start. He could go to post favored to win, though that honor may go to Domain, who finished second in his last two outings.

Trainer Bill Mott will be hoping for the same in Sunday’s seventh race, in which he will saddle Golden Award, a half-sister to 2012 Kentucky Derby winner I’ll Have Another. The Medaglia d’Oro filly was fifth in her debut but improved to finish second in her next start. She will stretch out a bit more as this is a nine furlong race.

The last time they met, Monomoy Girl got the better of Midnight Bisou in the Kentucky Oaks (G1). Both fillies have since raced, with Midnight Bisou taking the Mother Goose (G2) by six lengths and Monomoy Girl adding a victory in the Acorn (G1) to her résumé. Chapter two of their budding rivalry will take place in the Grade 1 Coaching Club American Oaks, carded for nine furlongs. They will face just three other fillies, including the winner and runner-up of the Fair Grounds Oaks (G2), Chocolate Martini and Eskimo Kisses, respectively. Post time is 5:40 p.m.

If you’re looking for a good betting race on Sunday, the Grade 2 Eddie Read Stakes is it. The storied race drew a field of 11, eight of which are graded stakes winners with the other three graded stakes placed. Those likely to take most of the money are Sharp Samurai, last year’s Eddie Read winner Hunt, and multiple graded stakes winner Itsinthepost. If this were a mile race, Bowie’s Hero would be a solid choice, as well, however this is a nine furlong event, a distance over which the 4-year old colt has never excelled. Post time is 8:30 p.m.

editor - December 18, 2018
0
Image: AAP Greg Nelligan has admitted he bet on horses after giving them...

When will the Champion Chase winner next race? All the news...

Blended Citizen Up The Rail For Jeff Ruby Steaks Victory –...

Gundam Are Jockeying for 1st Place at This Year’s Arima Kinen...