Plenty of sunshine and ground at least verging on ‘good’ gave the November Meeting at Cheltenham an unusual feel, where an incident-filled BetVictor Gold Cup headlined the Saturday action.

A good weight-carrying performance from Frodon in that race was matched by the heart-warming return of Coneygree in the previous contest, the 2015 Gold Cup winner getting one of the best receptions I’ve seen for a third-place finish after his excellent return.

He doesn’t make this week’s My Stable eyecatchers nominations, but the horse that finished in front of him does, Royal Vacation, a lenient rise potentially allowing him to make his mark in handicap company in the coming weeks and months.

A trio of horses are selected following the publication of the revised BHA ratings following the first two days of the November Meeting, while the BetVictor Gold Cup comes under the microscope now we know what the participants will run off next time…

Royal Vacation is BACK after a season in the wilderness and just a 3lb rise looks a generous assessment of his performance in the BetVictor.com Handicap Chase over just about 3m4f (considering the extra 76 yards) on Saturday.

Rated 143 after dropping 9lb following a turbulent 2017-18 campaign, a 203-day break looked to have done him the world of good as he travelled and jumped like his old self under Tom O’Brien at the weekend.

Rock The Kasbah went up 6lb to 153 after his victory, but Royal Vacation was closing on him at the line and only a slightly better position rounding the home turn, and an aggressive tactical play at that point from Richard Johnson, was the difference here.

Given how well he saw out his race, pulling five lengths clear of Coneygree up the hill, a 3lb rise looks lenient for Royal Vacation, especially with his form as a novice in mind, and it’s a mark he can take advantage of in the coming weeks.

The good thing is he’s versatile regarding ground conditions, so he wouldn’t mind if it turned softer, while connections always have the option of reaching for the blinkers again. He ran like he didn’t need them here, but it’s worth remembering they triggered significant improvement when first applied.

As for targets, there should be plenty of options for him. He’ll be a player in any staying chase he’s entered in at around the same trip he ran over on Saturday, while connections nominated the Grand National as a potential long-term target on Tuesday.

Paul Henderson was going for a third-successive victory in the BetVictor Handicap Chase at Cheltenham on Friday and he was doing so with last year’s winner, Doitforthevillage.

Market confidence was low in the nine-year-old, though, as he drifted from 7/1 out to 11/1 following the preliminaries and he is a horse that has needed a run or two in previous campaigns.

With that in mind he shaped well, as he still had a chance when making a race-ending mistake at the second last and he could well have challenged Movie Legend for second had he stayed on his feet, even if the winner Bun Doran was in a different league.

The handicapper has dropped him 2lb to a mark of 135 and that’s his last winning rating. With this run under his belt and less-demanding opportunities likely to come his way, it’s a mark he could well take advantage of granted the right scenario.

He did his winning in this race last season without the hood on, so seeing that removed next time would not be a concern and he’s another that won’t mind the ground turning soft.

Experience came to the fore in the mallardjewellers.com Novices’ Chase as Ibis Du Rheu picked up Theatre Territory after the last to win his first chase at the eighth attempt.

Warren Greatrex’s mare was also having her seventh run over fences, and she remains winless, while the front two had double the experience between them than the rest of the field put together.

However, this was a really nice performance from Theatre Territory and there’s nothing ungenuine about her despite her four seconds and three thirds from seven chase starts.

She jumped superbly on Saturday and with her handicap rating remaining the same it is surely in that sphere where she will break her duck.

A good third in the Topham on her first go over the Aintree fences, she could be Becher Chase-bound next, while the Betdaq Handicap Chase at Kempton in February, in which she was third last season, could also be on her agenda.

The Steel Plate And Sections Novices’ Chase at Cheltenham on the Friday usually produces a good ‘un and it’s also been a good pointer towards the Festival handicaps in the past as well (including last year when the third, Coo Star Sivola, won the Ultima the following March).

This year’s renewal could well have unearthed more than one handicapper to keep an eye on as well with Nicky Henderson’s pair, Jenkins and Mr Whipped, both allotted a rating of 145, the ceiling number for the Close Brothers Novices’ Chase at the Festival.

White Moon is rated 2lb lower than that on 143, and was arguably unlucky not to win after coming down at the second last when short of room, so all three could now be pointed towards a Festival handicap and it will be interesting to see which routes they take from here.

The winner, Count Meribel, did tremendously well to get back up under Mark Grant after a bad mistake at the second last, but the RSA Chase looks a more likely target for him. He’s up 5lb to a mark of 148. 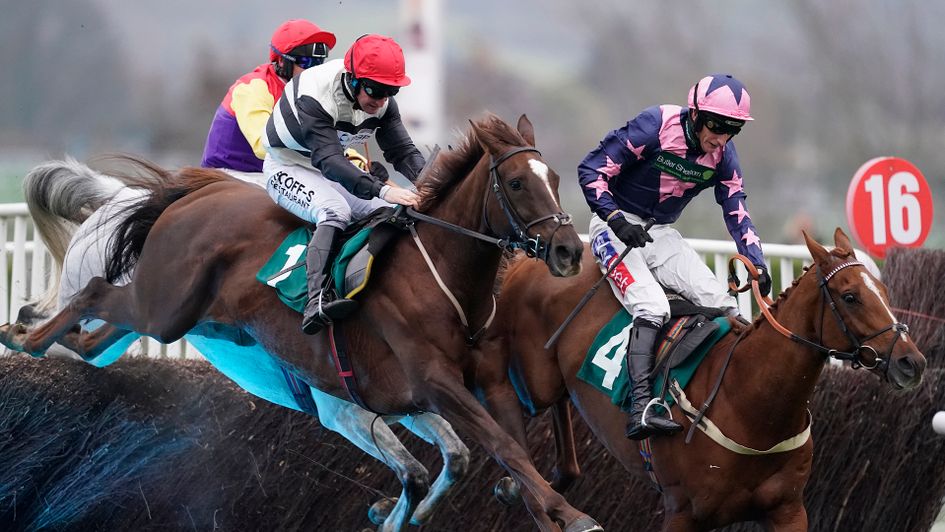 Count Meribel (red cap) on his way to victory

A dramatic renewal of the BetVictor Gold Cup and one won by the front-running BARON ALCO, a horse that stayed away from all the trouble with an excellent all-the-way win under Jamie Moore.

Moore had replaced his brother, Joshua, on the horse following the withdrawal of the same stable’s Benatar earlier in the day, and he got his mount into a lovely rhythm, just as he had at the Cheltenham Festival 18 months ago when the pair were second to Road To Respect.

He was on the sidelines after that for nearly 600 days, but returned at Chepstow last month with an encouraging second and he kicked on from that here, earning a 6lb rise to a mark of 152 for his two-length defeat of Frodon.

It would be dangerous to assume his new rating will stop him next time on account of the carnage that happened behind him, as this effort suggests he’s better than ever and his style of racing will always give him a chance if he jumps as well.

He might turn out to be not too dissimilar to Village Vic, a horse that pinged around this course and distance on several occasions despite various hikes in the weights, and I’m sure his season will be dominated by his trips here.

Frodon ran a cracking race in second under a big weight, his new rating of 164 (up 3lb) putting him right in the Ryanair mix, although it should be remembered he was outclassed in that race last season.

Guitar Pete and Mister Whitaker ran perfectly sound races and remain on the same marks (137 and 152 respectively), but they were perhaps a tad unfortunate to finish placed given what happened at the fourth last.

While those two stayed out of trouble, both Happy Diva (140) and Rather Be (149) were taken out by the crashing fall of Willie Boy (136) and all three of those horses were going well at the time.

It’s impossible to say what would have happened and the handicapper could do nothing other than leave them alone, but all three, as long as they come out of the race unscathed, would have to be considered big players were they to return to Cheltenham for the December Gold Cup.

Rather Be will probably attract the most attention given he’s trained by Nicky Henderson and was relatively short in the betting, but both Willie Boy and Happy Diva were travelling just as well and both of those horses would relish softer ground.

Ballyandy (stays on 137) was also badly impeded and he had also not been asked a question yet after jumping much better than he did on his reappearance at Wetherby.

The ‘Weighed In’ My Stable

Best bets, tips Hawkesbury and Nowra: Inside Mail and analysis

Enjoy ‘Battle for the Best Burger’ & horse racing in Meadowlands...

Expert: How to bet Improbable in the Los Alamitos Futurity