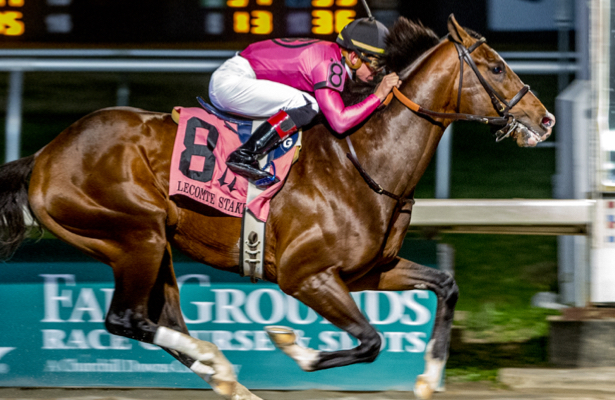 The 2019 Kentucky Derby trail continued this past weekend with Fair Grounds’ Lecomte Stakes (G3), and the entries are already in for Oaklawn Park’s kickoff to the 3-year-old season in Friday’s Smarty Jones Stakes. Here are my top takeaways:

From Turf to Dirt

At the conclusion of the Breeders’ Cup, connections to War of Will were in a predicament. The colt had run with the best on turf in four career starts, including twice in Grade 1 company. But he hadn’t yet won a race.

So they returned him to the maiden special weight ranks — only this time on dirt. Trainer Mark Casse credits owner Gary Barber for taking a shot, one that paid off with a victory back in November at Churchill Downs, then set War of Will on the Derby trail as the Lecomte winner.

Expect War of Will to remain at the Fair Grounds and for his next start to be the Risen Star. He’s the latest former Breeders’ Cup Turf starter to translate his talent to the main track following the likes of Mendelssohn, Catholic Boy and My Boy Jack last year.

Here’s a look at the updated Derby leaderboard coming out of the Lecomte:

The field is set in the Smarty Jones.

The Kentucky Derby trail winds through Oaklawn for the first time this weekend. It begins with the Smarty Jones Stakes, a 1-mile race named after the 2004 Kentucky Derby winner who took all three of his lifetime starts in Arkansas.

Though he hasn’t had too many opportunities — the race was inaugurated in 2008 — it’s still difficult to believe that Steve Asmussen has yet to win the Smarty Jones Stakes. His chances of scoring are as good as ever in 2019. He’ll send three horses postward, including the 1-2 finishers of the Springboard Mile, Long Range Toddy and Bankit, along with Boldor, a Virginia-bred that will be making his first start in a stakes race.

Something to look for the early prep races is a contender that tries to stretch his speed past six or seven furlongs. The entry in the Smarty Jones that fits that profile is Gray Attempt, the last out Sugar Bowl Stakes winner trained by William Fires. He’s a repeat winner at six furlongs, but how will the son of Graydar handle the full mile?

Stock Up, Stock Down

As mentioned, War of Will won the Lecomte Stakes. But, did I suggest how impressive his win was? He won by four lengths, received a Beyer Speed Figure of 94 and clocked a winning time of 1:43.44 over a distance of 1 mile and 70 yards. There’s a long way to go yet, but War of Will looks like a real Derby prospect.

A Lecomte runner who stands out as taking a step back is Tight Ten. Trained by Steve Asmussen, the son of Tapit scored four Kentucky Derby points in the juvenile season when he finished runner-up in the Iroquois Stakes (G3). Next time out he ran ninth in the Breeders’ Cup Juvenile but had his excuses. In the Lecomte, Tight Ten failed to fire again and finished 10th in a field of 12.

Talk Veuve to Me looks to rebound in Keeneland’s Spinster