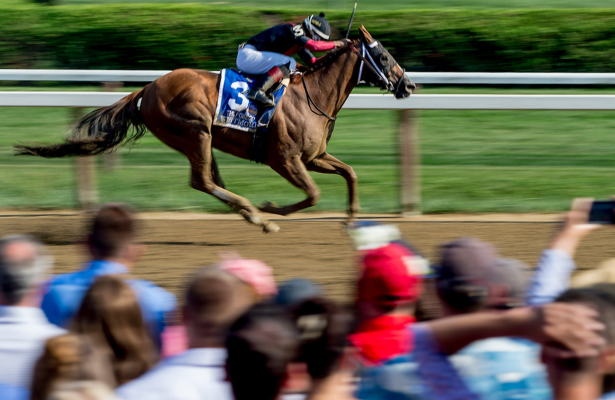 With favored City of Light caught wide throughout, Whitmore found the rail and went on to win Saturday’s Grade 1, $600,000 Forego, punching his ticket to the Breeders’ Cup Dirt Mile if connections choose to take him.

A chestnut son of Pleasantly Perfect, Whitmore sat behind a four-wide wall of horses through the early fractions before jockey Ricardo Santana Jr. cut the corner leaving the far turn.

“To run that well here, he’s as consistent as they come and he tries every time,” said trainer Ron Moquett. “He’s made a career out of outrunning his trainer and I just hope he keeps doing it. He’s a cool dude. He’s fun to be around. He’s a challenge. He brings that same tenacity on the track.”

#3, Whitmore wins the G1 Forego Stakes at #Saratoga for Trainer @RonMoquett with Jockey @RSantana_Jr on the mount: pic.twitter.com/6h8WcNYBh1


Heartwood set the early fractions, going the opening quarter mile in a swift 22.48, but wanted to bear out, making multiple Grade 1 winner City of Light’s trip that much farther. The 5-year-old Whitmore completed seven furlongs in a final time of 1:21.46.

“He broke real hard and kind of went down half a step and then gathered himself up,” said Michael McCarthy, who trains City of Light. “I think had we drawn inside it might have been a lot different but he was traveling comfortably throughout, he cut the corner and put in a run but the other horse had already gotten away from him. He put in a super effort; I can’t be upset with that.”

Whitmore, a member of the 2015 Kentucky Derby field, has earned more money sprinting later in his career and also appears bound for a shorter Breeders’ Cup event. This marked his first Grade 1 victory in what was the gelding’s 22nd start for owners Robert LaPenta, Moquett and Head of Plains Partners.

It’s somewhat temporary validation that you belong,” said Moquett, who indicated the Grade 2 Phoenix on Oct. 6 at Keeneland should be next for Whitmore.

Moquett also earned his second overall Grade 1 win as a trainer. This one was less surprising than the first, Seek Gold’s 91-1 upset of the 2006 Stephen Foster Handicap at Churchill Downs.

Fan favorite The Player cleared for return to the farm

Who won the 4.30 Derby at Epsom live on ITV TODAY?

Charlie Appleby looking to Soliloquy to solidify Classic hopes in the...

Mendelssohn only fourth as Patternrecognition picks up Cigar Mile | Horse...

Quinlan: Kalashnikov should be favourite for festival opener | Horse Racing...