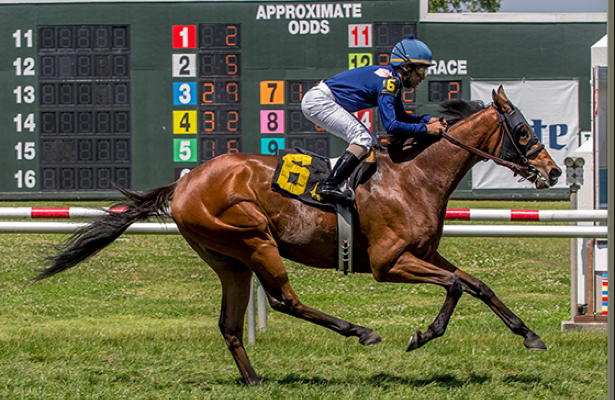 Trainer Tom Morley is happy to bring two-time Fair Grounds Race Course & Slots winner Ninety One Assault back to the New Orleans oval for a crack at a stakes victory in Friday’s $50,000 Mr. Sulu as the lukewarm 4-1 morning line favorite.

Owned by Morley in partnership with Paul Braverman, the 5-year-old son of Artie Schiller has yet to race at the stakes level, but has the advantage of familiarity with the Stall-Wilson Turf Course with a pair of wins over the local lawn this past March. Shaun Bridgmohan piloted the gelding in both races run at the Mr. Sulu’s distance of one mile.

Since his successful meet last season, Ninety One Assault has recorded a trio of starts. He raced over the turf at Monmouth Park on May 5 when he finished third, beaten 3 1/2 lengths against open allowance company. He did not race again until September when he finished eighth in a turf allowance race at Monmouth, but made amends for that effort when finishing third beaten a neck behind stakes-placed Clyde’s Image in an allowance race over a yielding turf at Belmont Park on October 4.

“He needs to have some speed to settle behind,” Morley said. “Obviously he had a quite a productive winter last winter with back-to-back allowance wins and he had decent run at Monmouth. Obviously with him being a Louisiana-bred it was worth giving him time off to prepare for a race like this and he seems to have done well physically with that time off.

“He appears to have put on some weight. We picked up the race at Belmont because it was the right distance and right timing for the Fair Grounds and I thought that he ran unbelievably well there. In a couple more strides he probably would have won.”

With a positive effort from Ninety One Assault in the Mr. Sulu, Morley would likely race him back in the $100,000 Louisiana Champions Day Turf Stakes on December 8.

“We’re pointing toward Louisiana Champions Day,” Morley said. “This is obviously an important race but on paper he certainly looks like he’ll be competitive. He won’t mind the rain that’s coming; he did handle a little cut in the ground at Belmont. Also, Shaun rides him very well.

“I don’t want to say he’s a difficult horse to ride but you certainly need to know how to ride him, so I hope they can resume their winning ways.”

Morley went on to speak of Donegal Racing’s Carrick, who gave the trainer his second Grade 1 victory when taking the Secretariat Stakes at Arlington International Race Course back in August.  The 3-year-old son of Giant’s Causeway is likely to campaign at Fair Grounds this winter, but will make one more start this year in the Grade 1, $300,000 Hollywood Derby at Del Mar on December 1.

editor - April 12, 2018
0
TOP Tipster Templegate, along with ITV's Matt Chapman and the Wizard Of Odds have given us their tips for the Randox Health Topham...

Confusion over Down Royal’s future after news course is to close...