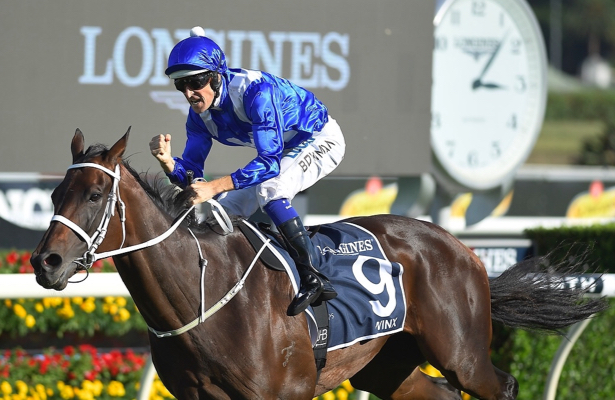 With Australian super mare Winx on a 25-race winning streak, yet halfway through a 7-year-old season in which many horses would be slowing down, trainer Chris Waller has been looking for signs of regression.

He told Racing.com, however, that around around the barn, “Every day I am looking for negative body language, but I don’t see it.”

Winx is training up to a return in the August 18 Winx Stakes — yes, already named after her — which is now a Group 1 event she’s already won when it was formerly known as the Warwick Stakes.

The daughter of Street Cry ran through her first barrier trial on Monday, handled conservatively by jockey Hugh Bowman.

“Obviously she didn’t figure in the first three,” Waller told Racing.com, “but that was never the plan. The plan was to get around safely.”

Chautauqua stays in the barriers, Winx goes through the paces and She Will Reign wins. Great way to start a Monday. pic.twitter.com/UoKwbiOJJS


It will be at least another week before Winx trials again heading into her return race.

This year, she’s already won a trio of Group 1 events: the Chipping Norton, George Ryder and Queen Elizabeth. In the process, the mare has both eclipsed John Henry’s world record for career Group 1 victories with 17 and matched Black Caviar’s winning streak at 25 straight.

Winx’s 130 rating tops the current Longines World’s Best Racehorse Rankings, one point ahead of American Horse of the Year Gun Runner’s 129 received from his victory in the Pegasus World Cup.

General Tufto marches onto the Fibresand for another milestone | Horse...

Three longshots to fill your pockets at Sandown and Beverley