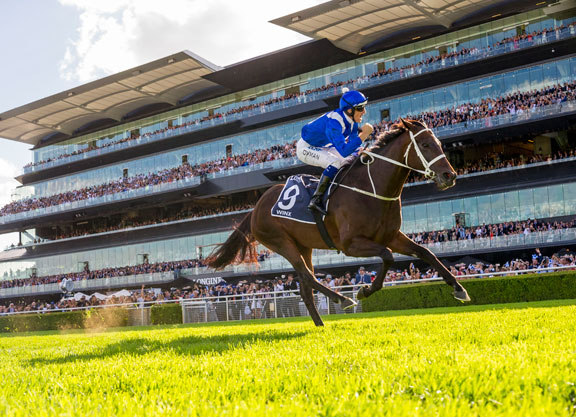 SYDNEY, Australia–Well, we can’t say Winx (Aus) (Street Cry {Ire}) is peerless. But if your one peer is the unbeaten world champion sprinter Black Caviar (Aus) (Bel Esprit {Aus}), that’s not too bad.

Five years and one day ago, Black Caviar closed out her unbeaten career with a win, her 25th, in the G1 TJ Smith S. at Royal Randwick. Those on track that day likely didn’t expect to see such a spectacle again any time soon, let alone just five years later, but that’s what happened on Saturday when Australia’s latest superstar of the turf, the 6-year-old mare Winx, equaled Black Caviar’s record of 25 consecutive wins in Australia with a stirring score in the A$4-million G1 Queen Elizabeth S.

The Queen Elizabeth was the highlight of a four Group 1-card that was dominated by her trainer Chris Waller, who bookended the Queen Elizabeth title defense with wins by Unforgotten (Aus) (Fastnet Rock {Aus}) in the Australian Oaks and Who Shot Thebarman (NZ) (Yamanin Vital {NZ}) in the G1 Sydney Cup. Godolphin was the one to break the stranglehold in the day’s fourth Group 1, the G1 Coolmore Legacy S., when its well-related 3-year-old filly Alizee (Aus) (Sepoy {Aus}) bounced back from a few disappointing efforts to record an eye-catching win.

Fastnet Rock and I Am Invincible had been the two leading sires by average at last week’s Inglis Easter sale and they proved why when ruling the roost at the races on Saturday. Fastnet Rock’s three stakes winners on the card were headed by Unforgotten and Catchy (Aus), last year’s G1 Blue Diamond S. winner who took out Saturday’s competitive G2 Arrowfield Sprint in smart style. I Am Invincible quinella’d the G2 Percy Sykes S. for 2-year-olds with Pure Elation (Aus) and Fiesta (Aus).

But, back to Winx. It was, incidentally, just weeks after Black Caviar bowed out in a blaze of glory at Randwick that another plain dark bay mare inconspicuously picked up the baton and began her own historic skein with a win in the May 2015 G2 Sunshine Coast Guineas. Winx’s streak has since encompassed 18 Group 1s, highlighted by three Cox Plates, both features at The Championships, three G1 George Ryders’ and a G1 Epsom H. It was long anticipated by racing fans globally that Winx may travel overseas after this autumn prep, but connections’ announced their decision to keep the mare racing domestically after her latest win in the Ryder three weeks ago. The target is now a record fourth win in Australia’s most important middle-distance, weight for age race, the Cox Plate, in October. Such a feat in Australia would be considered equal to a horse winning a race like the Arc, Breeders’ Cup, King George, etc., four times on the fly.

“She’s just an exceptional athlete, she creates so much attention, I’m just so elated, I’m so proud of her and I’m just so proud to be a part of it,” said Winx’s jockey Hugh Bowman post-race. “There’s so many cogs to the wheel and I know I get the dream ride here today. God forbid if something went wrong it wouldn’t be a good place to be, but she’s so exceptional, she is able to overcome everything and what a pleasure she is for sport.”

editor - December 3, 2018
0
Welcome to our link roundup, where we share our favorite stories from around the Internet! Know a link that should be included? Email...

Jockey protest leads to cancellation of race at Woodbine | Horse...