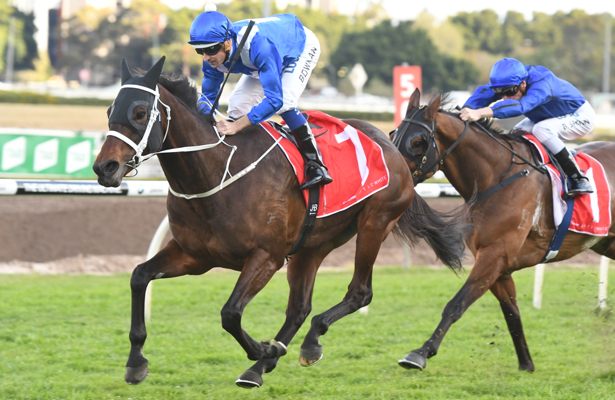 Winx had won 25 races in a row entering Saturday’s, well, yes, they’re already naming races after her: the Group 1 Winx Stakes. And yet the great Australian mare managed to make more history.

A 26th consecutive victory just past 1 a.m. on the East Coast eclipsed the great Black Caviar’s winning streak at Randwick as the daughter of Street Cry likely winds down her career.

“I don’t know how to explain it,” said co-owner Peter Tighe. “I love horse racing. I’d go anywhere for a horse race. But when you get a horse like her, it’s like you’re standing in a different place looking at someone else’s horse. I’ve never felt like that as I have today.

“I’ve said earlier that the benchmarks have been set. She’s got the benchmarks and she’s set her own. The challenge is there for someone else to come along and emulate what she’s done. While it’s happening, we’ll enjoy it.”


And that’s history!
In the race named in her honour, Winx does what only she can and makes it a record 26 consecutive wins @royalrandwick, eclipsing Black Caviar’s 25. None better ?? pic.twitter.com/a2frNIc4nX

The main competition this time was Godolphin runner Kementari, just the latest in a string of nearly 60 individual Group 1 winners Winx has defeated during the streak. Those two ran evenly through the turn of the seven-furlong Winx Stakes. But only one, the runner on the far outside, kicked forward with some legendary power from midway in the pack.

The only obstacle proved that of Winx’s walk toward the gate, when jockey Hugh Bowman briefly hopped off to adjust the saddle.

Throughout the streak, Winx has won at up to 1 1/4 miles on turf, too, and is expected to target another record-setting feat, a fourth straight Group 1 Cox Plate to potentially close her career in October.

Trained by Chris Waller, Winx is also the world record-holder for career Group 1 wins and currently ranks as the leader in the Longines World’s Best Racehorse Rankings.

She won this race last year when it was then known as the Warwick Stakes. Upgraded to Group 1 status — for good reason — he race was re-named to honor a legend still running.

Very emotional moments following the #Winx Stakes for winning Trainer @cwallerracing! Here what he has to say about the incredible mare: pic.twitter.com/6Yu247G8Ev

And they’re off: Horse races in Fort Pierre now set |...

Latest horse racing results: Who won the 3.20 at Doncaster live...