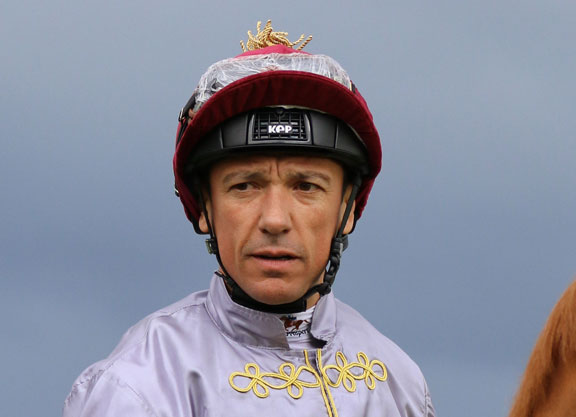 John and Tanya Gunther’s Without Parole (GB) (Frankel {GB}) is out of Saturday’s G1 2000 Guineas with a foot bruise. Trainer John Gosden said the homebred, who won a novice race at Yarmouth by six lengths on Apr. 24, is likely to target the G1 St James’s Palace S. at Royal Ascot.

“It could have brewed up from the race at Yarmouth,” Gosden said. “Like any little bruise it comes there and pops into a little abscess form.”

“I think with a horse like this we will get a nice race in before Royal Ascot, that is the way to look at it I think,” he added. “He is a very nice type of horse and we will treat him with respect. Hopefully we’ll freshen him up for the Heron S. at Sandown on May 24 and look at the St James’s Palace S. at Royal Ascot.”

The defection of Without Parole means that Gosden’s number one rider Frankie Dettori is free to ride the George Scott-trained James Garfield (Ire) (Exceed and Excel {Aus}) in the Guineas.

“I feel for the connections of Without Parole, who clearly has a massive future regardless of missing the Guineas,” said Scott. “I felt it was hugely important to have Frankie on board. He knows the horse so well and he has a lot of confidence in the horse. He is the magic man and if anyone can pull it out the bag he will.”

Scott was speaking after James Garfield worked over the Cambridge Road Polytrack gallop on Tuesday morning, and he said, “He didn’t really have a blow and he was bright and fresh after the work. I’m delighted with that.”

GPS tracking of racing horses on the horizon

Horseracing Integrity Act to be heard by House subcommittee

Super Screener: Why to bet against Queen’s Plate favorites