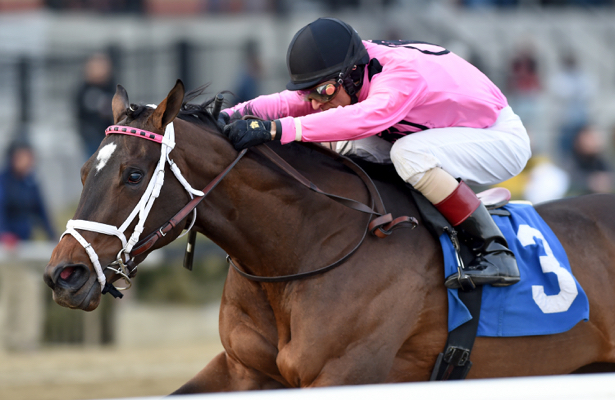 Queen’s Plate winner Wonder Gadot continued her run through the Canadian Triple Crown series with another stylish victory Tuesday evening, taking Fort Erie’s $400,000 Prince of Wales Stakes as a heavy favorite in the field of six.

Off at 2/5, the Mark Casse-trained daughter of Medaglia d’Oro skipped over the slop to a final time of 1:58.71 for 1 3/16 miles, putting in a front-running effort under Hall of Fame jockey John Velazquez.

“The more I warmed up — the more I looked at the track — I was just like, ‘I can’t have her behind horses tonight. The track doesn’t look right for her,'” Velazquez said. “I wanted to keep her face clean where she’s comfortable in front.”

It worked, as Wonder Gadot clicked through opening fractions of

23.65, 48.03 and 1:12.96, positioned a path off the rail and feeling only light pressure to her outside from Cooler Mike. There was a gap back to the rest of the field sprayed with the soupy surface.

After stumbling from the gate, Aheadbyacentury moved through the field to challenge coming off the turn, but Wonder Gadot kicked clear for a 5 3/4-length victory over him. Cooler Mike held on for third.

Twelve horses are recognized as Canadian Triple Crown winners with Wando, in 2003, the most-recent of them. Horses running in the series must be foaled north of the border and are tasked with runs over synthetic, dirt and turf courses.“Different surface today. Different style today,” said Velazquez, who also guided Wonder Gadot in the Queen’s Plate on synthetic. “I took my chances, and she responded to everything I wanted to do.”

This year’s series concludes Aug. 18 with Woodbine’s Breeders’ Stakes on the grass. It’s unclear whether Wonder Gadot will attempt it given a stated interest by connections, particularly owner Gary Barber, to run that same day in Saratoga’s Grade 1 Alabama Stakes. Casse said the Alabama’s “been on the radar for a long time, so we’re just going to have to wait and see.”

Notably, with Justify having swept the Kentucky Derby, Preakness and Belmont Stakes, Wonder Gadot could make history if she moves on to the Breeders’ Stakes. There has never been a U.S. and Canadian Triple Crown winner in the same year.

A $325,000 auction purchase, Wonder Gadot won multiple graded stakes at age 2 but has moved forward significantly midway through her sophomore season. After finishing second to Monomoy Girl in the Kentucky Oaks, she added blinkers for Woodbine’s Queen’s Plate and scored a commanding 4 3/4-length win. The equipment remained on Tuesday for another impressive score, which improved Wonder Gadot’s career record to 5-4-3 in 13 starts.

Horse Racing Betting Tips: Time for Fun and Magic in the...

Grand National Festival results – Who won the 2:25 at Aintree...