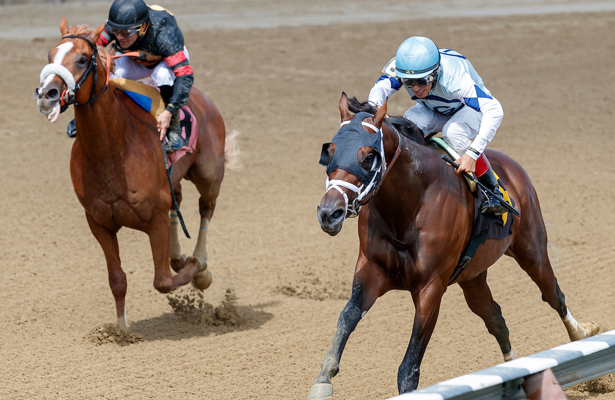 The 30th running of the Oklahoma Derby and the supporting undercard of nine more stakes races is drawing plenty of attention for Remington Park. The biggest racing program of the 2018 season takes place at starting at 3 p.m. CT Sunday.

The Grade 3, $400,000 Oklahoma Derby could feature a full field of 14 talented 3-year-olds. Many potential starters are putting in their final morning workouts before traveling to Oklahoma City for the weekend. The same can be said for others already on the grounds at Remington Park who have acclimated to the fall weather and surroundings.

Wooderson, a half-brother to 2009 Horse of the Year Rachel Alexandra, worked a half-mile at Saratoga in upstate New York on Sunday, Sept. 23 for trainer Todd Pletcher, breezing :50.02 over a fast surface. Pletcher has confidence that the best days are ahead for Wooderson, seeking only his second lifetime victory, when he races in the Oklahoma Derby.

“He worked well so all is on schedule,” Pletcher said of Wooderson’s Sunday morning breeze. “He’s a nice horse. He’s shown some talent and I think he’s improving. I like the fact that (Oklahoma Derby) is a mile and an eighth, so we’re looking forward to running him. He’s still putting it together.

“I’m going to take the blinkers off. He was just a little bit keen in the first turn (in a Sept. 1 allowance at Saratoga), but he was still making up ground late. He’s getting better, a work in progress, but he’s continuing to improve.”

A son of Awesome Again out of the Roar mare Lotta Kim, Wooderson is expected to van to Churchill Downs in Louisville before boarding the Tex Sutton Equine Transport “Air Horse One” and flying to Oklahoma City, before dawn on Friday morning.

Combatant posted his first workout at Remington Park on Tuesday morning, breezing a half-mile in :49.69 over a fast track.

A colt by Scat Daddy, Combatant will return to a dirt surface in the Oklahoma Derby after a pair of turf stakes attempts at Saratoga in upstate New York where he was out of the money.

Combatant is one of at least three expected for the Oklahoma Derby from the barn of National Hall of Fame trainer Steve Asmussen. The leading trainer in the 2018 Remington Park season could start as many as five in the event.

Limation, the winner of the Grade 3 Super Derby on Sept. 2, put in another half mile workout on Tuesday morning at Remington Park. Owned by Michael Langford of Jonesboro, Ark., and trained by Asmussen, Limation has worked well in Oklahoma City since scoring the Super Derby. His Tuesday breeze was his third here since winning that event. He clocked :50.78 over a fast track. Langford and Asmussen are attempting to win a second consecutive Oklahoma Derby, having earned the trophy in 2017 with Untrapped.

Believe In Royalty, winner of the $75,000 Ellis Park Derby in his last race on August 12 (finishing 5-3/4 lengths ahead of Limation), worked five furlongs Tuesday morning at Churchill Downs for trainer Larry Jones. The Tapit colt breezed 1:02.2 over a sloppy track. Believe In Royalty was sixth in the Springboard Mile at Remington Park in 2017.

Sea Foam, a winner of two consecutive stakes races for New York-breds, breezed five furlongs in 1:03 on a fast track at Belmont Park on Sunday.

Sea Foam won his most recent effort, the $250,000 Albany Stakes at Saratoga on Aug. 24 at the same 1 1/8-mile distance utilized for the Oklahoma Derby. Trainer Christophe Clement has confidence in sending Sea Foam into open-company competition at Remington Park.

“Everything is well, but it’s a big jump. He’s a nice horse, he’s never stopped improving. We’re going to keep moving forward with him. I like the horse,” Clement said. “He won a stakes last year and two stakes this year, so why not? He’s worth taking a shot. It’s not going to be an easy race, there’s some nice horses in there, but we’re going to do our best.”

Sea Foam is expected to fly “Air Horse One” from Baltimore to Oklahoma City on Friday evening.

Others possible for the Oklahoma Derby are the Asmussen-trained pair of Lionite and Retirement Fund; John Servis shippers Diamond King and First Mondays; Plainsman and Eisenstaedt.

Remington Park will feature an all-stakes Primetime Pick 4 as part of the wagering menu on Sunday. The Primetime Pick 4 will carry a guaranteed minimum wagering pool of $100,000 and will begin with Race 9 of 12.

Watch Eddie Ahern on Judgethemoment at Lingfield after 10 year ban

Racing Post - September 8, 2018
0
Jockey Eddie Ahern has been disqualified for 10 years by the BHA after being found guilty of stopping Judgethemoment in a race at...