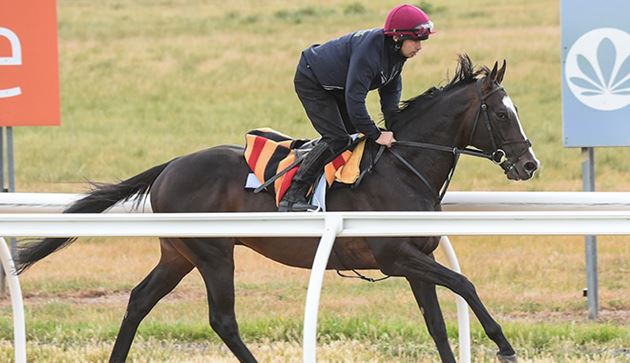 It was Caulfield Cup morning but there was a more-than-gentle reminder of the impending shift of the Spring Carnival to The Valley, when the Melbourne Cup favourite Yucatan and Manikato Stakes favourite Kementari were among those who had first-time gallops at the track.

The morning rain added some softness to The Valley surface, leading Yucatan’s owner Nick Williams to claim it was ‘the nicest surface he’d ever walked on’.

The former Irish horse certainly looked at home walking two clockwise laps in the rain before turning the other way for a couple of laps at varying, but moderate, speeds.

The workout was a leisurely but important one according to Williams as the horse builds towards his most likely next run in the November 6 Melbourne Cup.

He said all indications were that the ‘puffy joints’ the horse suffered, leading to his withdrawal from the Caulfield Cup following his Herbert Power Stakes win, had settled down.

“He wasn’t put under any pressure today and that’s when you find it out,” Williams said post-gallop. “That’s why Aidan (O’Brien) didn’t want to run him again today (in the Caulfield Cup) and put him under pressure again seven days after that tough run.

“I know he won easily but whichever way you look at it, he had a very tough run. He sat four-deep the trip and he knew he had that run so we did not want to put him under any pressure so we came here today and he strolled around a couple of laps and he looked good.

“He’s come through it quite well. Obviously the physical signs are the puffy joints, but you wonder what it does to their minds.”

WATCH: Gallops at The Valley

Yucatan could be nominated for next Saturday’s Moonee Valley Cup but Williams said it was unlikely he would run in that race or the Cox Plate, for which connections would need to pay a $200,000 late entry fee by Monday morning to get into the race.

“It’s up to Aidan and his team but it’s (Moonee Valley) probably unlikely. He’ll probably go straight to the Melbourne Cup I would have thought.”

The impressive entire Kementari pleased his trainer James Cummings as he builds towards a valuable Group 1 in next Friday night’s Manikato Stakes.

“He just worked around lovely,” Cummings said of Kementari’s gallop.

“He’s a really classy sprinter/miler and he acquitted himself nicely around the turn and as soon as Glyn Schofield straightened up on him he was very giving and wanted to let down within himself rather sweetly so that’s what we needed to get out of this morning.

“He’s pulled up in good fashion and we’ll head to the Manikato with him and I think he’s ready to run well.

“He’s put a bit of weight on and bulked up – he looks a sprinter now. He’s been no trouble at all and he’s had a really straightforward few weeks.

“He’s in good shape. A beautiful horse and it will be a pleasure to saddle him up on Friday night.”

Also giving the Strathayr surface a test was the three-year-old filly Sunlight, who takes on the likes of Kementari and a range of older horses in the $1 million sprint next Friday.

Trainer Tony McEvoy explained the morning was never about breaking the clock.

“She just cruised around,” he said. “We didn’t put any pressure on her today.

“I just asked Luke (Currie) to let her have a nice breeze around and enjoy it. She was interested and on the right leg and Luke said she felt very comfortable.

“She’s bounced out of her race at Caulfield really well. She’s had a nice, easy week but she’ll come back up Tuesday and we’ll open up her lungs a little and that will have her ready for Friday night.”

This Weekend on Betfair previews